Why is a daily routine of positive self-talk important?  I heard someone say, “that the secret to your future is hidden in your daily routine.  Change your routine and you will change your life.”  Well, I have created many routines in my life.  Everything from making myself more productive, to how-to, create a healthy body.  But never once, did I ever consider what I said to myself on a daily basis, my self-talk, to be a routine; but it is true.  What we think and say to ourselves becomes as routine as drinking and sleeping.

Let me tell you though, as soon as I realized that my self-talk was just as important as the gas I put into my car,  my life started changing.

This one change in my daily routine…

Have you ever stopped and listened to how you talk to yourself?  You’re probably saying, “I don’t talk to myself”.  Spoil alert….  You do.  We all do!

Dialy there is a constant flow of messages in our mind and much of it we are unaware of.  These messages talk about our appearance, our health, our work, our skills, our weaknesses, our family, the list goes on and on. 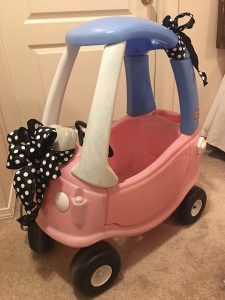 The conversation that is going on in your head, conscious or unconscious, is pressing the gas peddle, or putting on the break to your motivation and self-confidence.

Each mental conversation is the driver behind the wheel determining your course of travel, and ultimately your final destination.

Mark twain once said, “I’m always in conversation and sometimes other people are involved.”

Have you ever gotten lost?  I have!  Thank heavens for our GPS.  My GPS keeps me going in the right direction as I travel to an unknown destination.  A moment of panic happens though, when I put in the address into the GPS and instead of a map popping up on the screen, I receive a message that says, “Destination cannot be found?” YIKES!!!  Now, what do I do?  Something is blocking my phone’s signal and I cannot get a clear reading.

The same concept applies to your self-talk. The mental conversations could be blocking your thoughts and stopping not only your progress but, also your ability to hear needed inspiration.    Negative thoughts that block this communication often goes unnoticed.  Why? Because hearing these thoughts has become a normal state of thinking.  It’s familiar and feels safe.

I was just joking…

A negative thought spoken is often passed off as a joke, or a way of teasing.  Yet, no one ever considers the damaging impact a negative comment can make.  Once inside the mind and accepted as a true perception, one comment can quickly and easily erode away a person’s confidence.

So, what you say to yourself is very important!  Your words will be the driving force behind good grades, strong relationships, checking off your goals list, and even winning a gold medal.

Is self-talk really that big of a deal?

I heard about an article in Atlantic.com where a study was done in 1993, asking 17 Champion Figure Skaters, how they coped with stress. What were their trade secrets?  A compiling of 158 unique strategies, that the skaters used found out that the most common strategy used by 76% of the skaters, was “SELF TALK”

These skaters got into driver’s seat of their mind by using SELF TALK to affect their performance.

Self-Talk CHANGES YOUR ATTITUDE AND YOUR OUTCOME.

RUBIN GONZOLAS, an Olympic medalist, recognized the power of self-talk. He made a list of daily statements which he called the Champion Creed.

He said it helped him “to be Resilient in the face of life challenges.”   He believed it helped him to stay focused and become a 3-time Olympic medalist

The Champion Creed by Rubin Gonzolas

On those days that I am hit with an extra load of worry to deal with…starting the day right is half the battle.

The moment I open my eyes…

I say a simple statement 3-4 times over in my head…” It is going to be a great day!”

What do I do when concern over a situation comes on strong?

Immediate attention must be given to redirect my current thoughts; if not I will spiril down into an attitude of overwhelm, frustration, or even irritation.  To keep it simple I created a routine called Cre8 Reminders.  It’s a process for creating apersonal affirmation designed specifically to lift my mental state.  A stronger statement that basically over-rides the mental program running its course currently through my head.

Here are my steps:

Typically I can review a statement 1-2 times and my mind gets back on a healthy track.  The goal is to make these statements stronger than the dialogue that is currently running through your mind,

The voice in your head is a running commentary to yourself…. about yourself

Brain research has found out that we send ourselves messages at a rate of nearly 500 words per minute. That seems almost impossible, but remember this conversation is happening inside where nobody hears, but you

A thought has a way of creating its own reality.  One might say, “you hold your future in the palm of your hand,” but the true reality is, the future is created in the space between our ears.

Which lead us to an important truth…

What you think, and focus on, will magnify and become a reality.

So, if you dwell on negative thoughts, a negative attitude will be created.  An attitude that will stop you from reaching your dreams.  I have heard it said that very little effort is required to think negatively.  But to create positive thoughts takes constant effort.

Achieving what you want first begins with BELIEVING you can achieve.

I once heard a story of a College professor who was getting ready to give the final exam for his class. Before he handed out the test, he started bragging on the class, telling them how well they had done through the semester.  They were told that since they had done so well, he wanted to offer them something special.  He said, “anyone that would be happy with an automatic c grade on the test, could just raise your hand, and you will not have to take the test.  No worry that you will fail, because I will give you an automatic C as the final test grade.  You will be able to pass the test with flying colors.

The students were shocked and surprised.  Slowly one hand went up, and then another hand went up, and then another.  Within a few minutes half of the class had their hand up.  He excused them and told them that their final test grade would be a C.  Excitedly these students exited the class, giving each other a high 5 as they passed through the door.  The air was filled with a feeling of relief as the stress of taking a test lifted.  These students were ecstatic that they would not have to worry about getting a failing grade.

The students who stayed

Then the professor went on to pass out the test to the other students.  As he passed by each desk he laid the test face down on their desk, and told them “do not turn these pages over until I tell you to do so.”

The professor then continued to encourage them.  He told them how they were going to go far in life, how their belief and positive attitude was going to take them to great places.  He said, “Always continue to believe in yourself, and strive to do your best, just like you have done today.”    Then he instructed them to turn the test over and get started.

The students turned the pages over, and to their surprise, there were only 2 sentences on the paper. They read, 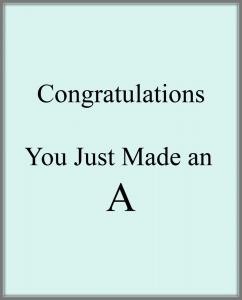 Wow!  Because of their belief, that they could do a better job at taking the test, than accepting the average….a C; is what actually gave them an instant A.

They were the students who set a standard for themselves to be higher than average; the ones who had a positive attitude, and believed that they had what it took to get an A. In reality got the A.

Why settle for less?

Are you allowing your life to be driven by thoughts that create a negative attitude?

The compiling of negative thoughts is what creates a negative attitude.  The thinking that

Taking the easy routine and Being Average

When you allow negative thoughts to stay, and formulate a negative attitude, the perception that is talking in your mind is, “I am settling for a C.”  “I would rather be average, than risk failing.”  “I feel safer choosing to just barely make it….than to face the challenge of a new experience.”

Your mental self-talk will constantly talk you out of great things in your life…. You will always feel inadequate, unqualified, too shy, not good enough, not enough skill, just average, etc.; unless, you change the direction that your thoughts naturally drive.

Be BOLD ! Make a U-turn in your route and Believe in Yourself.

Set your standard of Faith by pressing on the gas peddle and accelerate your belief.  Use your words for power and the direction to charge and focus your action.

Right now, is the time to take the wheel and become the driver of your thoughts.  Start speaking words that program you internal GPS toward faith, growth, and hope in your life.

Do you want to See where your Life is heading?

Time to get “real” with yourself by listening to the words that are coming out of your mouth.

You believe yourself more than anyone else.  What you repeatedly hear, you do eventually believe. “Nothing will come out of your mouth, that has not been thought of first.”

The big buzz word right now is to Be Authentic.  Be the “real you”.  Truthfully, the real you is what you are creating in your mind.

I am 100% sure, that if you throw out that negative thought, replace it with  positive thoughts that create a positive attitude, you will actually begin to Change what you see happening in your life.

You believe yourself more than anybody.  What you repeatedly hear, you eventually believe.  Now is the time to take the wheel and drive your thoughts in the direction of where you really want to go.

1 thought on “Positive Self-Talk, why making it a Daily Routine is Important?”